What I Learned this Season

I have to say I admire the people that can sit down and write their thoughts as soon as they have them.  I think I used to be able to do that, but for whatever reason, my brain takes a lot more time to sort itself out lately.  It ends up being a lot of over analyzing, rationalizing, and looking for answers to WHY.  But it's Sunday, and it's cold outside, and for once I don't really have an excuse :)😏

Sometimes there is no answer for why something happened.  That is one thing I've learned.  We equestrians spend an inordinate amount of time not only preparing ourselves for our athletic events, but we also have to prepare our equine partners.  We do our best to be sure both are fit and mentally prepared.  But there are sooooo many things that can change the outcome of our endeavor no matter how prepared we think we are.  For example, this fall at Waredaca, Toga and I were having a stellar cross country round, when at the take-off of the second to last fence, he suddenly veered to one side, then jumped the jump.  I landed first, right under him, and he rolled me a bit.  For the first hour or so after I got up, I searched for a reason for the behavior.  This was the first time Toga "stopped" (although he really didn't, he did end up jumping) at any cross country jump that I can remember.  I've come off him before, but those two times XC were when he bounced me out of the tack on landing.  I asked people around me, I watch the video that I am so lucky was taken of the fall, and I tried and tried to figure out what happened.  It took me a few days to finally say....well, shit happens. I don't know what made him spook like that, but I do know that if I had taken the fear and suspicion forward, I wouldn't have had the great rides I did at VHT the following weekend.  I said OUT LOUD that we were going to have a great round, and as Toga did his airs-above-the-ground on his way to the start box, I knew he had no lasting issues and I shouldn't either.

I learned that saying what you believe, and just as importantly, saying what you want to do OUT LOUD makes a difference.  I read Coach Daniel Stewart's book Pressure Proof Your Riding and it says in one section that, basically, whatever comes out of your mouth, your brain tries to make happen.  To some people I guess that's Psych 101, but it hit home for me when I thought about how many times I have said "Oh I hope I don't ride off course" or " I am the queen of riding off course".  Well I don't say that any more.  I say I will NOT ride off course and I will have an AWESOME ride, and I do my best no matter what has happened before.  And I visualize riding the whole course before I go in.  Over and over.  And in 2015 and 2016 I did not ride off course in show jumping.  Not once.  And I won't do it again.  That's my story and I'm sticking to it.  :)

I've said this before. that sometimes you may not have the best luck, but you just have to work with what you have.  I was reminded that every horse I've ever competed was green when I got it.  I either broke, trained, or retrained them all.  I've never had a "made" horse, so how I would ride, where I would be, what I could do if I'd had a made horse to start with,  with remains a mystery.  But I don't care, because I've done well with some of them, and it's always a challenge.  Blind eyes, broken necks, mental baggage, big tendons...yeah not ideal, but sometimes there's a light at the end of the tunnel.  B (Biricchino) may not make the upper levels of eventing because of his neck, but he sure will make someone a beautiful Training packer and the best trail ride anyone has  ever sat on.  Toga won't go Intermediate any more, but he loves his job and if he wants to just go Training, he can do it forever. Uh, if I can keep him away from Addie in the summer :))  Now I have Buddy, the latest OTTB with the looks and movement, and so far attitude....we shall see about the heart and skill.  This one will require a bit more patience than B, so I may have to say OUT LOUD that I won't push him.  Everyone that knows B knows his funny, dorky, "whatever" attitude mixed with just enough **** you when we jump is why I was able to push him on a bit faster than I might another green bean. Plus the fact that Toga was out with a giant splint last summer/fall so B was all I had to ride.... We've had more than our fair share of rails in stadium, but ZERO stops in show jumping or XC.  When he gets quicker up front, he will quit hitting jumps.  But that's part of what we skipped, and what we will work on over the winter.

This year was focused on the AECs - which was a blast - and that will probably be my goal again for 2017.  Toga and I finished 6th in the Master Amateur Training division, and 8th at the Area II Championships.  I finished on the (bottom of the) leaderboard without taking T to too many shows, that's kind of cool.  I think Toga is already qualified, so I will try to get B to the AECs as well,  in the Novice championship.  He was (ironically) the high place amateur novice horse at VHT and the third at SureFire where he pretty much ran away with me the whole cross country.  Our overall scores reflect what really happened, I just think it's funny that he has high placings at anything.  I think it will be a challenge to keep Toga sound this year (just 17 yr old horse creakiness), but I won't take him out as much as I have in the past.  Besides, it's almost too expensive to Event any more, let alone with two horses.  B will start early at Southern Pines, and maybe I'll take Buddy down there with me.  The next few months Toga will chillax, and B will work on his canter departs and jump grids.  Buddy will just circle and see how much he wants to do!

I appreciate The Surrey letting me post my ramblings and I hope to keep up better as the season begins in the spring.  Getting away from the farm has been, and appears to continue to be difficult, but things always seem to work out.  Starting the horses out on the great footing in NC not only jump starts their training, but it jump starts my brain into forward, positive thinking. 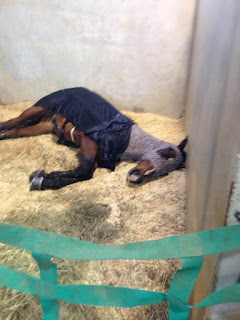 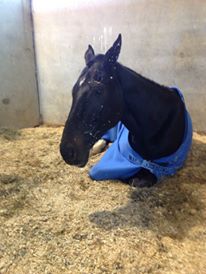 My horses are SO ready

I hope everyone has a great Holiday Season!  Go shop at The Surrey 🎄