Doing the best you can with what you have

The other day at my lesson, Packy asked me what we had to do to win the dressage at the AECs - besides being lucky.  After I realized he wasn't giving me a hard time, we talked about how much luck really does factor in to how your six minutes in the arena ends up.  How you feel that day, how your horse feels that day, the weather, the atmosphere of the show, then the hundreds of stupid little things you can do wrong or that can go wrong once you go down center line.  If all the stars line up and you get a good day, what can you do to keep the mistakes to a minimum, and what can you do to show you and your horse's best performance.  Multi-task much?

Luck has a lot to do with my riding "career".  Riding is not my living, it's my hobby and my lifestyle. I don't go horse shopping for my next competition horse, they just kind of show up.  Even Toga, who I bought on a whim as a sales project, wasn't a plan.  Here and there, nice horses have been pointed in my direction and I have had the luck to notice them.  I have had a lot of projects, and almost all of them have been nice horses that I was happy to see go on and do well.  (Too) many of them I kept, and have had the pleasure and fun of being pretty competitive on.  I'm not saying hours practicing in the saddle and every extra penny haven't contributed, but I sure have been lucky -maybe fortunate is a better word - to have these nice horses end up in my life.

When you do get lucky and have a nice horse to work with, the road from there isn't always easy.  We all know that horses spend most of their day looking for a way to hurt themselves, and the rest of the day doing it.  So injuries and illnesses have to be expected.  If you get away without any of that you are MORE than lucky!  Sometimes you have to take what is handed you, and make the most of it. Look past what you see, and see what you have.

When B arrived off the track a year ago, the first thing we noticed was a few scars behind his poll on the right side of his neck.  It kind of looks like burn scars.  We (Dr. Lewis and I) really didn't have much information about his life so it wasn't until I started riding him that we thought much of it.  Some fussiness and reluctance to bend through his neck led us to take a closer look.  We X rayed his neck and found that he had broken facets at C5.  Pretty ugly mess in there, lots of jagged and gnarly looking bone.  Not a great sight.  Turns out he was in a field accident when he was a foal and was found all mangled but they don't know what he did.  I guess going in a straight line didn't bug him. 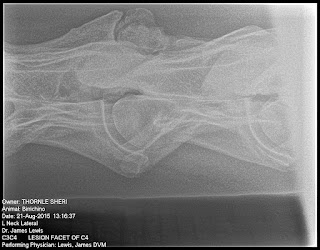 I've always said that attitude is 75% of a horse's worth..  More than half for sure in my limited opinion, but that's what I think.  So now I have a horse with a broken neck, BUT he's sweet, quiet, brave, doesn't spook, hacks on the buckle, and is willing to work in spite of the neck issue.  So on we go, We injected the messed up facets, and gave him osphos to try to stop the arthritis from progressing.  He struggles on the flat but tries hard.  Turns out he is a really good mover, and the stronger he gets, the less he paddles, and the better his transitions are getting.  He behaves such that when he is round and over his back, he is more comfortable than when he is inverted.  There you go -  just what we want!  He competed at Novice at his first recognized event and was totally competitive.  Had fussy moments in show jumping - still trying to figure out a bit he likes - but jumped all the jumps and loped around cross country like an old horse.  And he got a 32 in dressage go B!  All that wouldn't have been possible if he wasn't the kind, eager to please animal that he is.  For the rest of the summer we will work on transitions and jumping in a straight line, and wait for the weather to cool off and the ground to soften.

Toga has always had an issue with his eye.  It prevented him from being sold for a lot of money, twice.  Lucky for me, he didn't get sold and I got to compete through the CCI** level and have more fun than I can even express.  Toga's eye didn't bother him until 2013, and unfortunately it took some very difficult and frustrating rides to realize that it was his eye that was at least one of our problems.  His cataract and floaters had gotten really bad, so bad he wouldn't go near a jump.  We covered the eye to see how he would deal with just one, and BOOM, he was a new man.  He took a deep breath and said let's get back to work.  So after getting special permission to wear his eye patch in competitions, he's back in the ring.  There is definitely a vision aspect of his performance now, I think he struggles with depth perception. for instance airy oxers seem to bother him.  He will stay at Training level where he is confident and eager to run and jump. 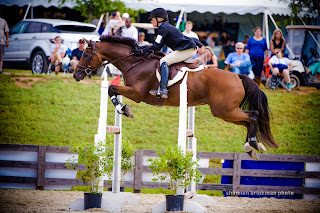 So here we are, ready to compete in  the  Master Training division at the AECs.  We will be very competitive - we need to get lucky to some extent, but we have been working hard and doing all I can to keep the old man comfortable.  We have been working extra hard on our flatwork, and a few extra jump schools have us both eager and confident.  Toga has some normal older horse aches and pains besides his eye, but he powers on, tries as hard as he can, and still gets so excited at the start box I can hardly get in there and touch my watch.  I would take 100 horses with some odd soundness issues if they have a heart and mind like my Toga and B ( and Marley, and Buddy, and Tommy, and Juice, and Fred).  Might be hard to ride, but it's worth it.