I have a new Most Memorable Moment in Eventing....nobody said it had to be a good moment, but it's one that I will never forget. It followed a brief moment when I was actually proud of myself and was listening to someone else tell quite a crowd all about it.

This past weekend I went north to the Stuart Horse Trials in Victor, NY. I'd never been there before but lots of people told me it was a great event. It was a long trip for me to drive alone - seven hours - but what a beautiful drive. Along the rivers and through the mountains, across some open highway and through some lovely little towns. The view varied enough to make the drive not a bad one at all. My poor GPS lady had a meltdown near the NY/PA border on Route 15 in both directions. She started yelling at me to make a U turn as soon as possible and to TURN NOW for about ten miles. All I can figure is that the road has changed since the GPS was loaded because there was nowhere to turn and I certainly didn't want to turn around! Having not paid attention to her once before and totally missing an exit on the way to Kentucky made me a bit nervous about ignoring her. It all turned out well though and I made it to Stuart faster than I had expected. I love my new trailer too I truly believe it is a much smoother ride for the horses than my old one. Both directions Toga came off fresh and relaxed - not wide-eyed and frazzled like he has so many times in the past.

Thinking it would be a lot cooler up there was wishful thinking. The nights were cooler for sure, but the days were hot and humid. I got there midday on Wednesday since it usually takes a while for Toga to settle in when we go away. But he was asleep in the stall within an hour and never acted nervous or upset at all. Go figure. Since my dressage time was 4:33 on Friday, I could easily have gone up Thursday and had plenty of time for him to chill. The people were all over me when I arrived, helping carry all my stuff to my stall, and bringing water over. The volunteers at Stuart are so proud of their show. Many of them have been doing the same job there since the event started over 20 years ago. It was fun talking to them. I am pretty well set up to stay in my trailer except for a generator - which would have made the last two nights more bearable if I'd had a fan. My sun shower was awesome now I just have to figure out how to get it up higher.

So there was a lot of down time. Too much for me, and too much for T I think. I rode him twice on Thursday and Friday morning. By the time it was our turn for dressage, it was past his dinner time, he was bored, and the flies were TEARING him up. I got off twice to spray him - used four different brands throughout the weekend to no avail - but he was so focused on the biters that he just wouldn't let me ride. Had some rearing, some flying changes, some striking at bugs, but the nice part was that the judge did give me credit on the nice parts. So along with my 3 and a few 5s, I got a couple 8s and 7s. Still, a 39.6 put me almost at the bottom. Again. Sigh. I was pretty angry about it because it was a lack of focus on his part that I think was the problem and he's a big boy now, needs to pay attention.

I walked the cross country course twice - the first time I was concerned about how hard the ground was, but they worked on it for three days with the aerator and by Saturday I thought it was fine for Toga. I watched quite a few of the CCI** horses go and it wasn't pretty. A lot of runouts and a few falls later I decided to not look at it any more and just worry about myself. After riding it, I think the two downhill- turning- to- skinnies early in the course were just early in the course... and at least my horse wasn't really focused on his lines yet so it was easy to be distracted. He was very quiet warming up and Liza and I both didn't want to bother him as he dozed in the shade. Quite a change from the usual breathing fire into the start box scene. He was very spooky at the start - there was a pond with a canoe before the first jump, and the second jump was alongside all the vendor tents. A lot to look at. He was hard to turn at the first two combinations, that were fences 4 and 6. But once we got over the ditch and wall, we both took a deep breath and I just let him gallop. I had pressed my watch twice, so it was off. Toga cruised around pretty much at one steady pace the whole time. I didn't press him, just balanced him up in front of the jumps when I saw our spot. He jumped way to early at the bank but just bounced up it like that was how it was supposed to be. Everything jumped well, and as I walked back from the finish I heard I'd only been five seconds over the time. I let him lope to the last jump so I know if I'd pressed him even a little we could have made it. Gotta love a Thoroughbred!!! Fastest time in our division and we moved up from 25th to 3rd. I was much happier Saturday night. 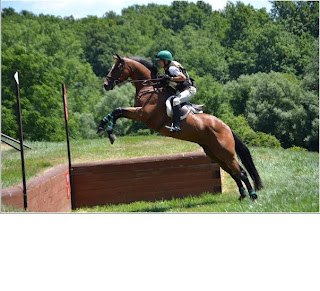 Now to the Most Memorable Moment. Sunday morning I knew I had another long wait to go. My division was last of the day, so I got to watch a LOT of show jumping. I walked my course which was a "lot of unrelated distances to remember" but really just two big loops. Toga felt amazingly loose and happy, and our warm up was quiet and smooth. I was READY. Not nervous, just excited to maybe finish towards the top of the class. I went in the ring feeling like it was going to be perfect. As I went to the first jump, I heard Brian O'Connor telling the crowd how I'd had a fast XC the day before and moved up from 25th to 3rd. Wow, I thought, pretty good. Jumped the first jump perfectly and went in a perfect six strides to the one stride in and out, jumped that perfectly too. Only that wasn't fence two, it was fence ten and in the OTHER DIRECTION. A few horrible seconds later I was walking out of the ring wondering why the heck I'd done that. So my moment was one of extreme embarrassment. Will I ever do that again?? Who knows. I don't know why I did it in the first place so it's hard to fix. But I DO know that I will never focus on anything but exactly what's in front of me again!! I feel like I let Toga down but what can you do. It was a beautifully run show and in the big picture I had my best ride ever along with one of the most frustrating. So it was worth it and I'll keep learning something new every time. On to the next one and new mistakes to be made I'm sure :)
at 11:09 AM