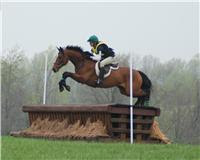 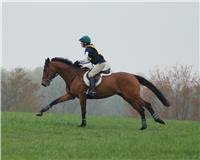 Morven Park was amazing - Had a good dressage score, clean jumping, and not only did I make the PreliminaryXC time, I was WAY under! Finally figured out the feel of really galloping between jumps and keeping the energy all the way to them. Finished 7th there.

Fair Hill International was cold and wet on Thursday, Friday, and Saturday and hot and muggy on Sunday. Toga settled in way faster and easier than I expected, being on the back side of the race stabling where he couldn't see anyone. But he fell asleep right away and even slept through braiding which never happens... I even did his tail it was stunning. Then HOLY COW did Toga trot like a big horse this weekend!! We got the best dressage score I've EVER gotten on any horse I think, and it was a no fuss, very relaxed test. Less than one point off the lead in a division of 34 starters. So proud of him! Cross country was deep, but he only slipped once and it was minor. Kind of got sucked into the ground - I could actually feel him pushing off - this was a real effort for a change. But T powered through and jumped around clean. I didn't push for time, but really should have come in a little faster... I misjudged my distance from the finish and kind of took my time at the end. Got a bunch of time penalties, but still was at 8th at that point. Glad I didn't push it though, because I have a sound horse and he recovered right away. Was tired for show jumping, but did at least three lead changes - that doesn't happen often!! He landed cross-cantering in the last turn and I thought he would switch, but he changed the wrong way and in my indecision about whether or not to try to fix it, I got him to the last in and out badly and he had to scramble over the first, knocking a rail. Totally my fault. STILL finished 5th in the end!! So much is coming together now I can't wait to see where this year ends :)

So at my age who would think Prom would dictate my show schedule?? Well Addie's first Prom is the weekend of Jersey Fresh, so my plan to do a CIC** there has changed. After Loudon this coming weekend, we'll do the CCI* at Virginia Horse Trials as a qualifier for the fall. After that, maybe Seneca and then I think we'll take some time off this summer. I think I caught up with everyone that got to go south this winter!
at 5:26 PM