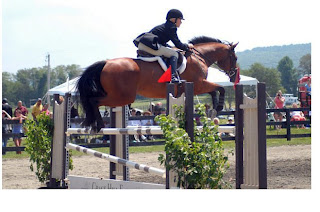 All things considered, this winter has kind of gone by fast. I've already entered two events and will have to enter another very soon. Toga seems pretty fit - today we did trots and canters in the indoor and after a ten minute trot, he went right to an eight minute canter and really didn't blink. I thought with the heat (yes HEAT for a few minutes this morning before the hurricane winds came and blew the temp down 20 degrees...) he'd get a little more stressed. But he cooled down with another ten minute trot and that was that. Followed by the first bath of the year and a tweaking by Dr. Lewis. I constantly worry that he is back sore - he's always pinning his ears and acting very cranky when I tack up and pull the saddle off. But we seem to feel now that it's all a bunch of b.s. so to speak - he NEVER feels off when I'm on his back, and he never pins his ears, swishes his tail, or any of the other tell-tale signs of soreness. So he's a prima dona I'm afraid and I'll just have to pay close attention to any differences in his behavior while he's working.

He's been awesome. Compared to this time last year, he looks like a different horse on the flat. It's really exciting to look in the mirror and see the change. It's easier and easier for him all the time and he's getting lighter and lighter in my hands. We haven't jumped a lot, but when we do he just blips over a 4'9" rail like he was stepping over it. SO fun.

The plan IS...... Southern Pines II, Morven Park, and the CCI* at Fair Hill. All at Preliminary - one regular, one hardish, one really hard then back up to Intermediate and it will only be May. I won't be so far behind everyone else after all. I'll go down to Southern Pines the Sunday before the show, and Toga will stay at Bobby Costello's barn. I'll get some XC schools and some lessons there to finish up the prep. I rode with Bobby last year right before the same show and it was very helpful. He's a great teacher and good fun. I'm looking forward to it.

Two observations today...... I ride a mare for one of my boarders on a fairly regular basis. She's very "mare-ish" all the time - lots of crying, angry faces at other horses, tail in the air, etc. But today she was amazingly quiet and good. I could tell the second I put her halter on that she was in a good mood, and sure enough she was the best I think she's ever been for me. Today was CRAZY windy, and if there ever was an excuse for spooking or acting stupid, today was it. But she was great. Anyway...there are two other mares in her field that are on Regumate. They are probably the most mare-ish mares I know when they are not on it. So I'm wondering, if their cycles are stopped by the drugs, do the mares around them stop as well, or at least change their cycles?? They all come in season together otherwise, so...???? Because the mare I rode today showed absolutely no signs of being in season, and most of the time she does at least a little. Maybe this is a fact but I thought of it first today :)

The other thing is that all my rides this week were SO SO good! Seven different horses that I rode a few times each and every time was great. How often does that happen?? I use my saddles on them all (their bridles) as usual, but this week used my new ThinLine pad. Don't know if that was it, just saying : )

Next weekend is our annual Fix A Test which benefits CANTER MidAtlantic and is judged by Lisa Cox. It's a great practice for the beginning of the season and Lisa always has great suggestions. The Surrey will be there with the traveling tack shop and there will be food for sale if anyone wants to come by to watch : )
at 2:40 PM