No excuses, nowhere to go

It's been a long time since I sat down in front of the blog page.  The past months have been tough, to say the least, and every time I thought about writing, I found myself ready to be angry at something.  But it's time to take a deep breath, look forward, and focus on the positive.

Starting with the negative, however, last winter SUCKED.  In soooo many ways it was the worst ever.  I made it to Southern Pines, but I really shouldn't have.  I can't tell you how much I appreciate the people that stepped up to help out during broken pipes and snow storms.  It was no picnic in So Pines either, it snowed, rained, and iced for most of the time I was there.  Toga came up lame with some weird swelling not unlike lymphangitis, but not lymphangitis... so he was along for the hacks.  Ari was awesome, and won his second Preliminary with Andrew McConnon up, then stayed behind to be sold.  For those of you who haven't heard me lament on the reasons I sold that beautiful animal, it's because it hurt me to ride him.  The way he moves just KILLS my back and it wasn't doing either of us any favors to continue with me on him.  He's living in Kentucky now and it appears he is loved there just as much as he was here.  I miss his sweet face and perfect attitude.

Came home from Southern Pines to my very own episode of Hoarders.  Ugh. That's a sad story not really belonging here.

Toga started out the year being amazing as usual, 11th at Carolina, kicking butt for 2nd at MCTA , 7th at VHT, and then Addie rode him to win at Jenny Camp and to 2nd at Seneca Valley Pony Club Horse Trials.  All finished on his dressage score, his jumping back to spectacular. A few weeks later, after schooling super well in all phases, Toga came up three legged lame again.  Turns out he cracked a splint bone, was not lame, then must have re-injured it and then was VERY lame.  Xrays show significant remodeling, so he is healing.  But three weeks later he is still quite lame, so I have to really put the AECs out of my brain.  It's just not going to happen.  So watch out next year, we will just have to be twice as good at Tryon :)) 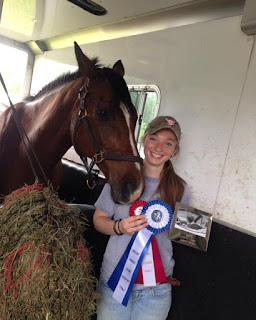 But in the meantime, I had a bit of luck in all of it.  A young horse bred my my vet's family, was in need of a home due to an uneventful career at the race track.  No sense of urgency. Welcome Biricchino, now "B" because it stuck, who could be Ari reincarnated in a TB body.  Beautiful, quiet, sweet, and big.  But the kind of big I CAN sit to. 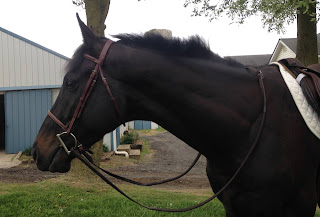 He is four years old, and talk about perfect timing!  He has stepped into the void left by me not having anything to ride ... He's still sooo green, but every time I sit on him we pick up where we left off and get better.  He is a good mover, LOVES to hack out, and seems to think jumping is OK.  He's schooled XC twice, and actually pulled me into the water at Woodstock.  I think he's a brave horse, just young and needs to see things.  I'm pretty excited about his future, but am trying not to push him too hard too fast.  Of course (are you kidding me of course I did) I ran the schedule of what would I have to do to qualify him at BN at the AECs this year.....but no, I think he needs to be able to canter a 20 meter circle better first ha ha. But it crosses my mind.  Every day.  No, stop.

So begins a totally new chapter in my riding career.  As I wait for Toga to heal, I am starting another young TB - one of my favorite things to do, I've discovered - looking forward to seeing how far he can go.  Toga will stay my main man, we just have to forget about this year's big goals.  It's not over yet...maybe the Area II championships, maybe a destination goal of the Mid South horse trials in KY.  Maybe B will get dragged along, maybe not, but my money is on him competing at something recognized this fall.  Many updates to follow for sure.

Sometimes it feels like things just don't want to work out no matter what I do, and the past nine months or so have sure tested me.  This farm has been the hardest thing I've ever had to deal with, but I believe it works out in the end. This is one of the best summers ever, the grass is green and thick, the place looks amazing and the horses are happy and healthy. I have always believed that good things DO happen to good people (eventually), and most of all that what goes around comes around.  Good or bad, it really does.  Just have to be patient.  Here's to Toga getting better and B catching up with him in the future! 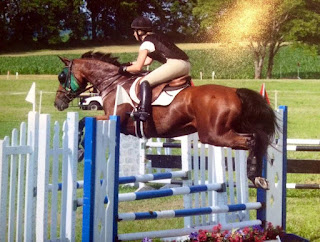